Journal Of Agriculture and Nature

In this study, the genetic diversity was investigated among 12 soybeans genotypes using inter simple sequence repeats (ISSR) and agronomic traits. DNA was isolated from the leaves of the genotypes. For molecular characterization, a total of 26 primers of ISSRs and eight agronomic characteristics were evaluated. ISSR analysis revealed 88 polymorphic bands. The genetic diversity among the genotypes according to ISSR analysis and agronomic traits were estimated based on Nei homology and Euclidian distance, respectively, and dendrograms reflecting genetic similarity were constructed using UPGMA and NTSYSpc, respectively. Nei’s homology coefficient values used for ISSR analysis ranged from 78%-84%, and the average Euclidean distance used for agronomic data ranged from 1.96-9.77. Although soybean genotypes evaluated in this study were highly similar, dendrograms showed that these genotypes could be distinguished both morphologically and genetically. 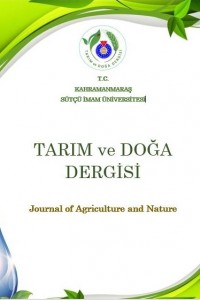