The aim of the study was to determine the factors affecting the decision of the entrepreneurship of the agricultural enterprises. For this purpose, a survey was conducted with 98 agricultural enterprises determined according to stratified random sampling method in the Ereğli district of Konya province and the factors affecting entrepreneurship were analyzed by multiple linear regression. In the study, entrepreneurial coefficients were taken as model dependent variables, and the amount of land, active capital, gross production value, MLU, producer age, agricultural insurance, net profit and formal education variables were included as independent variables. The description power of the model (R2)was determined as 77.50%. All variables in the model were statistically significant according to t test. Based on the results obtained; The amount of active capital and age variables falling negative, land quantity, gross production value, EIB, insurance, net profit and education parameters were determined as positive according to the theory. As a result, it has been revealed that educational activities increase the level of entrepreneurship and young entrepreneurs have more entrepreneurial characteristics. Therefore, it is recommended to support young farmers such as training activities, small scale agricultural enterprises (SAME) and incentives. 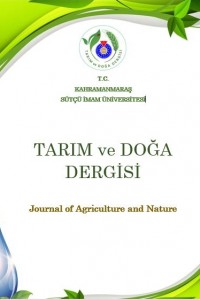