Today, accurate irrigation approaches are of great importance due to climate change and a decrease in water resources. FAO methodology based on reference evapotranspiration (ET0) and crop coefficients (Kc) are commonly used worldwide to determine crop water requirements (ETc). Kc values of different plants for different areas can be taken from FAO-56 and FAO-24. However, crop coefficients must be determined or calibrated for every relevant region because the climate conditions in the field and surrounding conditions may not be similar to the standard conditions. For this purpose, what crop evapotranspiration and crop coefficients would be in the case of timely (first crop) and late sowing (second crop) of maize were investigated in this study in Adana where the Mediterranean climate characteristics are prevalent during 2012 and 2013 years. A weighing lysimeter was used to obtain ETc and Kc of maize. ET0 was calculated using the FAO-56 Penman-Monteith (PM56) method. The results showed that the duration of initial, development, mid-season, and end-season growth stages for first crop maize was 22, 26, 43, and 37 days totaling 128 days, and for second crop maize, it was 14, 24, 42, and 38 days totaling 118 days. The ETc value of the second crop maize was 14% higher than that value of the first crop maize. The mean Kc values were 0.74, 0.92, 1.63, and 0.42 at the initial, development, mid-season, and end-season growth stages for the first crop maize, whereas they were determined as 0.46, 0.89, 1.68, and 0.92, respectively for the second crop maize. 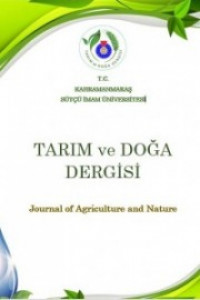